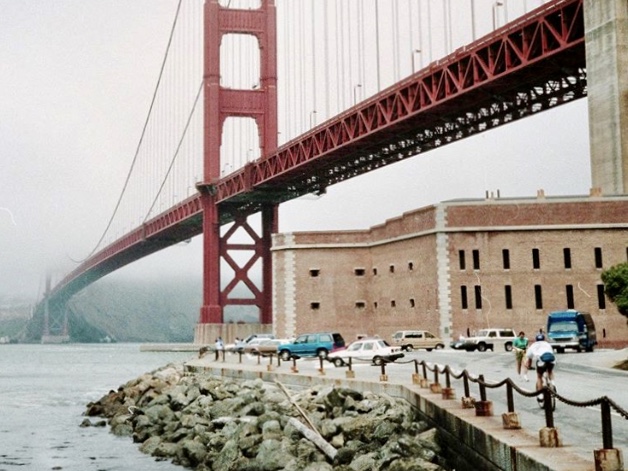 It’s eclectic, busy, and ever-changing. It’s home to artists, tech giants, and killer sports teams. Regardless of your interests, anyone -- and we mean anyone -- can have an epic time visiting San Francisco. And while we’re obviously all about travel to any new place, this city in particular means a lot to us at Dryftwell. It’s the birthplace of our company and home to both founders for many years.

Winter is San Francisco’s rainiest and coldest season but compared to many parts of the country, it’s fairly mild. Temperatures rarely drop below the mid-50s and it’s not uncommon to have several clear, dry days in a row.It is the perfect time to visit if you enjoy cozy restaurants and museums. There are also several ice rinks and a variety of holiday craft fairs to help you get into the holiday spirit.

As Spring begins in San Francisco, the rainy days start to come to an end and the temperature warms up. The city's lush parks are especially beautiful and in March, the locals go all out for St. Patrick’s Day. The bars embrace the holiday with special drinks, food, and decor and the streets are completely packed with people in green. The street festivals also start in the Spring, making it a fun time to plan a trip. You really can’t go wrong with San Francisco in the Spring!

“Indian Summer” starts in September and sticks around through the end of October, making fall in San Francisco a little slice of heaven. During these glorious months, you get the city’s warmest weather. And since it isn’t typical travel time, you get an added bonus of slightly cheaper pricing. Parks, the ferry building, and restaurant patios are lively as the whole city takes every opportunity to get outdoors. 10 out of 10 would recommend San Francisco in the fall.

Neighborhoods in San Francisco are more than just coordinates on a map. Each one truly has its own energy and represents the lifestyle of the locals that reside in it. So it comes as no surprise that the diversity between San Francisco neighborhoods is unparalleled and totally magical. We’re highlighting a few of the best neighborhoods to consider if you want to experience true San Francisco and have easy access to some tourist gems.

Nob Hill is centered around the highest spot in the city and it’s one of San Francisco’s most iconic neighborhoods. It’s filled with idyllic views, an amazing amount of bars and restaurants, and some of San Francisco’s most beloved attractions. Whether you want to bar hop on Polk St. or enjoy a drink from Top of Mark followed by a lovely dinner at Seven Hills, Nob Hill has something for everyone. But word to the wise, the word “hill” is not used lightly. If you decide to make this neighborhood your home base (which we totally support) make sure you’re ok with getting in a workout.

Local singles, couples, and families alike, all love this neighborhood for its perfectly balanced atmosphere of fun meets relaxation and its proximity to downtown. It boasts awesome shopping, cafes, bars, and even a fun beer garden. It’s a hidden gem that makes a great resting place for almost anyone who wants to get a very real sense of local living and stay centrally located for easy exploration!

The Marina is arguably one of the most stereotyped neighborhoods of this wonderful city, but we wouldn’t have it any other way. It’s known by locals for its love of yoga pants, brunch, and boat shoes. Its two main streets, Chestnut and Union, are jam packed with clothing stores, restaurants and bars, workout studios, and salons. While you could easily spend an entire weekend enjoying the Marina and its array of bottomless mimosa spots, if you chose the Marina as your homebase, make sure you make time to wander over to the Presidio and Fort Mason. They border this upscale little neighborhood and in our opinion, they are two of the coolest spots in the whole city.

Driving in San Francisco is notoriously stressful. Lyft, delivery, and truck drivers will stop and park anywhere, anytime. Making the already narrow, busy, and sometimes steep streets even more difficult to navigate. Parking is equally as challenging as your parallel parking skills need to be top notch and most neighborhoods have pretty strict parking restrictions of two hour limits. And don’t be late getting back to the car, this city gives out parking tickets like they’re candy and they aren’t cheap! The good news is, having a car is unnecessary. The city is only 7 miles in any direction so take it from us and just don’t drive in San Francisco.

If you do decide to drive, downloading the pay-by-phone app is helpful so you can add time remotely. And if you find yourself on the Embarcadero, the open lots there are actually a pretty great deal for all day parking so don’t hesitate to swoop into one of those if it's available.

Getting around SF on public transit is notoriously tricky, and a bit dirty too. It's no coincidence that Lyft and Uber were both started in SF, mainly to provide another option to frustrated residents. Download one, or both, when you arrive. It'll be your best option for getting from the airport to the city. Now with COVID, the use of public transit has become even less appealing. Thankfully, SF is pretty small so you'll be able to explore most areas by foot with the help of a few Lyft/Uber rides. You'll want to make sure not to miss a cable car ride. Don't wait in line at the beginning or end, just find a stop in the middle and jump right on.

San Francisco is walkable city for those who have thighs of steel and are willing to sweat a bit getting around. The hills in Nob and Russian Hill make it a workout. Google Maps can help with optimizing around the largest hills but in many cases navigating around these large hills is impossible. Make sure you bring a good pair of walking shoes if you want to explore by foot.